100% of the money from the sales of Secrets of Colombian Cooking went to the children of NUTRIR Barranquilla!

“…fills a void for the delightful, little-known and vibrant cuisine of this South American nation. You will be thrilled by the ethnic diversity and originality of the dishes passionately and thoroughly gathered by native chef Patricia McCausland-Gallo.” –Jacques Pépin

“Colombian cooking usually is tossed into general South American cookbooks and too rarely receives an entire mention apart from the rest of the region: enter Patricia McCausland-Gallo’s Secrets of Colombian Cooking, providing the much-needed focus on Colombian dishes alone. . . . Author McCausland-Gallo is both a nutritionist and pastry chef born in the Caribbean: her culinary back- ground lends to a clear survey of classic Colombian fare.” –The Midwest Book Review

Finally, an excellent book on true Colombian cuisine!
By Elena Hernandez on May 30, 2005
http://elamorporlacocina.com

I am lucky because Patricia now lives in Panama and I was able to attend a cooking class that showcased recipes from this book. In this class the author prepared 5 dishes: “Arroz con Coco y Pasas Titoté” – this is a rice prepared with coconut milk and raisins – the coconut milk is left to reduce in a cast iron pot – until only the coconut oil is left and it begins to stick to the sides of the pot and change to a brownish color – this is Titoté – add the raisins and let them sit for a few minutes until they begin to puff – add rice and fry it in the Titoté and then cook the usual way – the result is an ultra delicious rice dish fragant with coconut and with the sweetness of raisins added.

Chef McCausland also prepared a very famous little bread in Colombia called “Pandebonos” – they are very similar to Popovers but these are prepared with yuca flour and cheese – a very easy and quick recipe made in only a few minutes. One of the other typical Colombian dishes prepared were the “Patacones Pisaos” – giant ultra crispy green plantains fried and served with just a little salt sprinkled on top.

But, the one recipe that blew our minds and left every single person in that class crazy for Patricia Mc Causland’s Colombian cooking, was the “Cazuela de Mariscos al Coco” or “Crustacean Chowder” on page 90 of the book. This is the most delicious seafood soup I have ever tasted and the best part is that it is super simple to make and with ingredients very easy to find – seafood, you can use shrimp, clams, squid, mussels, or your favorite combination of seafood – you can even use the frozen mixed seafood in the 1 pound bags found in the supermarket – the recipe calls for fresh Coconut Milk, but you can substitute for the unsweetened canned one found in the store – other ingredients called for are saffron, to give the orangy color of the soup , cilantro, white wine, and parsley. This dish is – without exaggeration – amazingly delicious, I personally think that if you want a single reason to get this book, it would be this one spectacular recipe!

Other traditional recipes found in this book are “Ajiaco Bogotano” – the famous Chicken and Potato Soup typical of Bogota, the capital city of Colombia, “Empanaditas Vallunas” – little Beef and Pork Turnovers made with yellow corn and stuffed with a filling made with beef and pork cooked with onions, garlic, potatoes, and spices. “Arepas con Huevo” or Egg Filled Arepas – this dish particularly called my attention – is an arepa partially cooked, then cut open to stuff with an egg, closed again with more masa, then cooked until the egg is done. “Bandeja Paisa” – is a typical dish from the region of Antioquia – made with beans, meat, pork rinds,fried eggs, chorizos, rice, plantains and sauce. On the sweet side, “Arequipe” – or the equivalent for Colombian Dulce de Leche – “Arroz con Leche” or Rice Pudding, “Flan de Coco” or Coconut Pudding are some of the desserts that you can find in the book.

These are the TRUE secrets of Colombian Cooking – and no one can write a book about a native food better than a native Chef.

The recipes are simple to follow, and the results are outstanding.

If it is authentic typical Colombian recipes, in other words, the “real thing”, that you are looking for, then I highly recommend “Secrets of Colombian Cooking”. 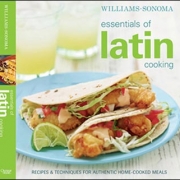 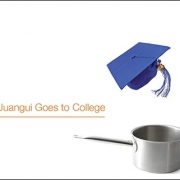 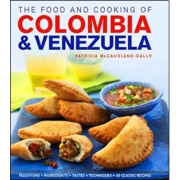 The Food and Cooking of Colombia & Venezuela 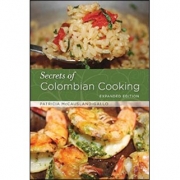 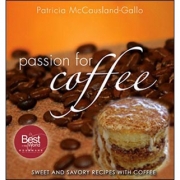 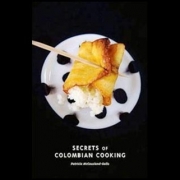